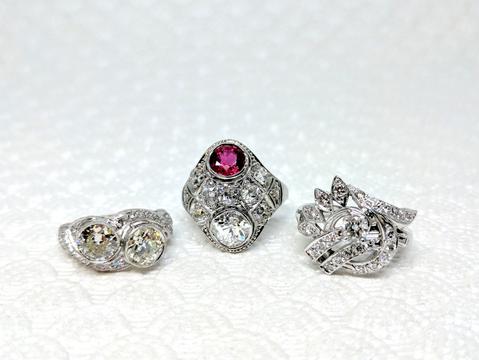 A piece of vintage jewelry often has a distinct look that sets it apart from something modern. Everything from the hand engraved details, to the style of the prongs tells a story about the era during which a piece of jewelry was made.

The way a diamond is cut can also give clues about the age of a piece of jewelry. Here are a few of the more common cuts you’ll come across when looking at vintage and antique jewelry.

The rose cut dates all the way back to the 1500s and it’s probably the easiest vintage cut to spot. When you look at a rose cut diamond it’s supposed to resemble the shape of a rose bud, hence the name.

While you may not think of round brilliant as a vintage diamond cut, it was actually developed in the early 1900’s and can be found in lots of vintage rings, necklaces, bracelets, pendants, and anything else you can imagine.