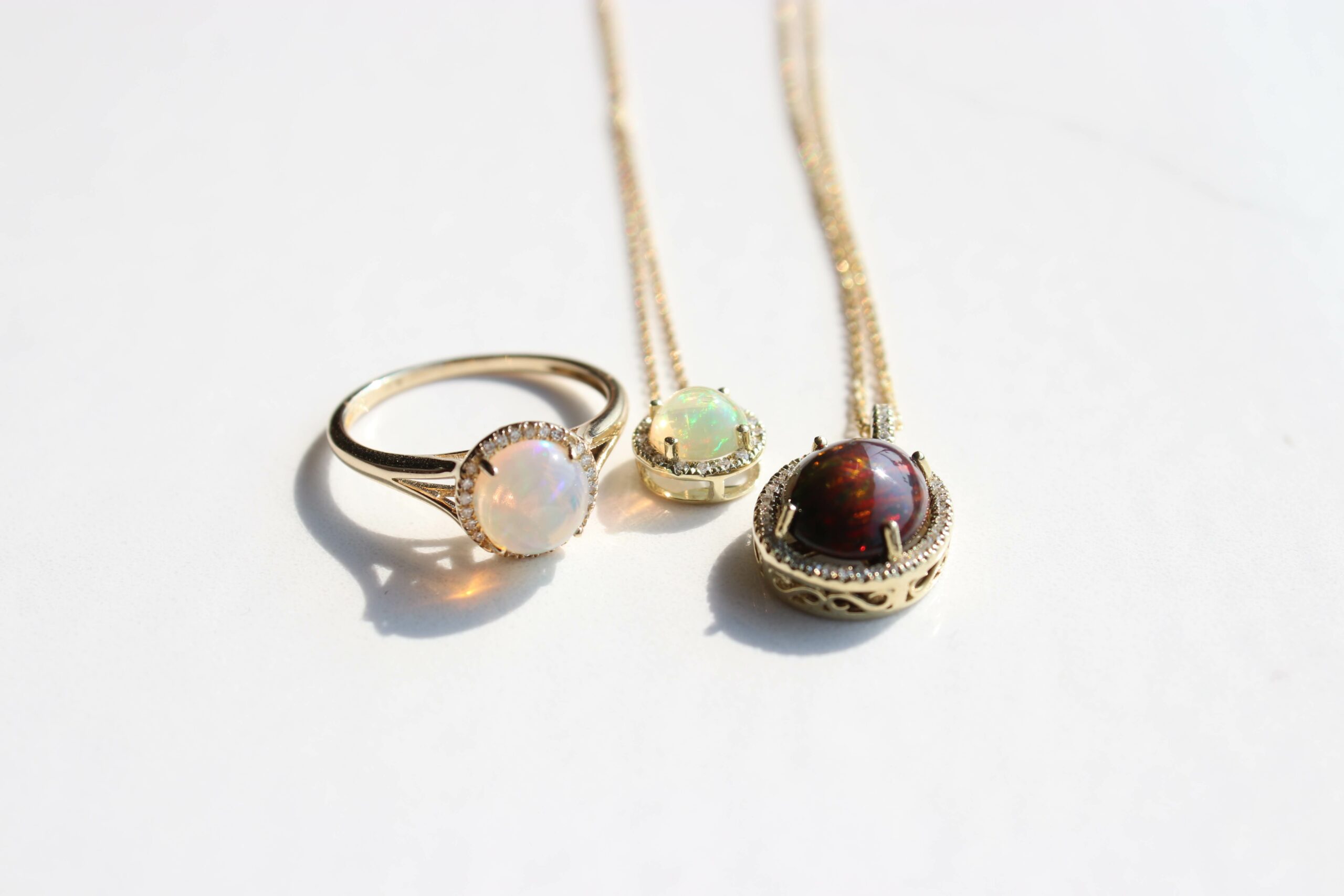 October’s two birthstones are opal and tourmaline. Opal is traditionally the more recognized October birthstone; however, tourmaline was added as a second birthstone in 1812. Tourmaline is highly valued due to its wide variety of colors, and hundreds of years ago, it was believed that opals carried the power and virtues of all colored stones.

One thing that sets opals apart from other gemstones is the phenomenon known as “play-of-color”, which are shifting rainbow hues. This colorful sensation has prompted many to compare it to rainbows, fireworks, and galaxies.

Opals have been valued throughout history, where Ancient Greeks believed the gemstone bestowed the gift of prophesy and protection from disease, Europeans thought opal was a symbol of purity, hope, and truth, Arabs believed that opals fell from heaven in lightning flashes, and Australian indigenous people believed opals held spiritual value and represented something left behind by their ancestors as a sign of their presence. During the Middle Ages, opal was thought to bring the wearer luck. In Victorian times, Queen Victoria, a known lover of all types of gemstones, truly treasured opals.

There are many sources of opal, including Australia, Ethiopia, Mexico, and Brazil. Australia has historically been a major source of opal, with the country producing 95% of the world’s supply of opals. However, this October birthstone was believed to have originated in India. Most opal is over 50 million years old and was formed as silica. When moved and exposed to light, opal omits flashes of colors from within. Colors of blue, green, aqua, and sometimes yellow and red can be seen in the gemstone.

Opal’s vivid and colorful shifting appearance has prompted many to believe that this October birthstone has metaphysical properties. Some of these unique properties include the ability to control one’s temper and to calm nerves. Necklaces with opals set in them were traditionally worn to repel evil and to protect eyesight. It was also believed that a dream of an opal meant that good luck would come.

Due to the wide variety of colors of tourmaline, it was often mistaken for other gemstones. For example, one of the so-called rubies in the Russian crown jewels along with the Caesar’s Ruby pendant are really rubellite tourmalines instead of rubies. Green tourmaline has often been mistaken with emerald, with incidents dating as far back as the 1500s in Brazil. Scientists finally recognized tourmaline as a distinct mineral species in the 1800s.

This October birthstone is most often found in Brazil, but is also mined in Afghanistan, Pakistan, Kenya, Madagascar, and Mozambique (among other countries in Africa). In the United States, California and Maine are historically important producers of fine tourmaline.

China was a big market for tourmaline. Chinese Empress Dowager Cixi thoroughly enjoyed pink tourmaline and bought large amounts of this gemstone from deposits in San Diego County. However, when the Chinese government collapsed in 1912, the tourmaline trade went down as well. It went back up again in the 1980s and 90s when neon green, beautiful blue, and vivid violet tourmaline discoveries in Brazil reignited interest in the gemstone.

Tourmaline is unique compared to other gemstones. One of the more interesting characteristics of this gemstone is that it can be electrically charged through heat and pressure. When it is charged, tourmaline can act as a magnet and attract or repel particles of dust.