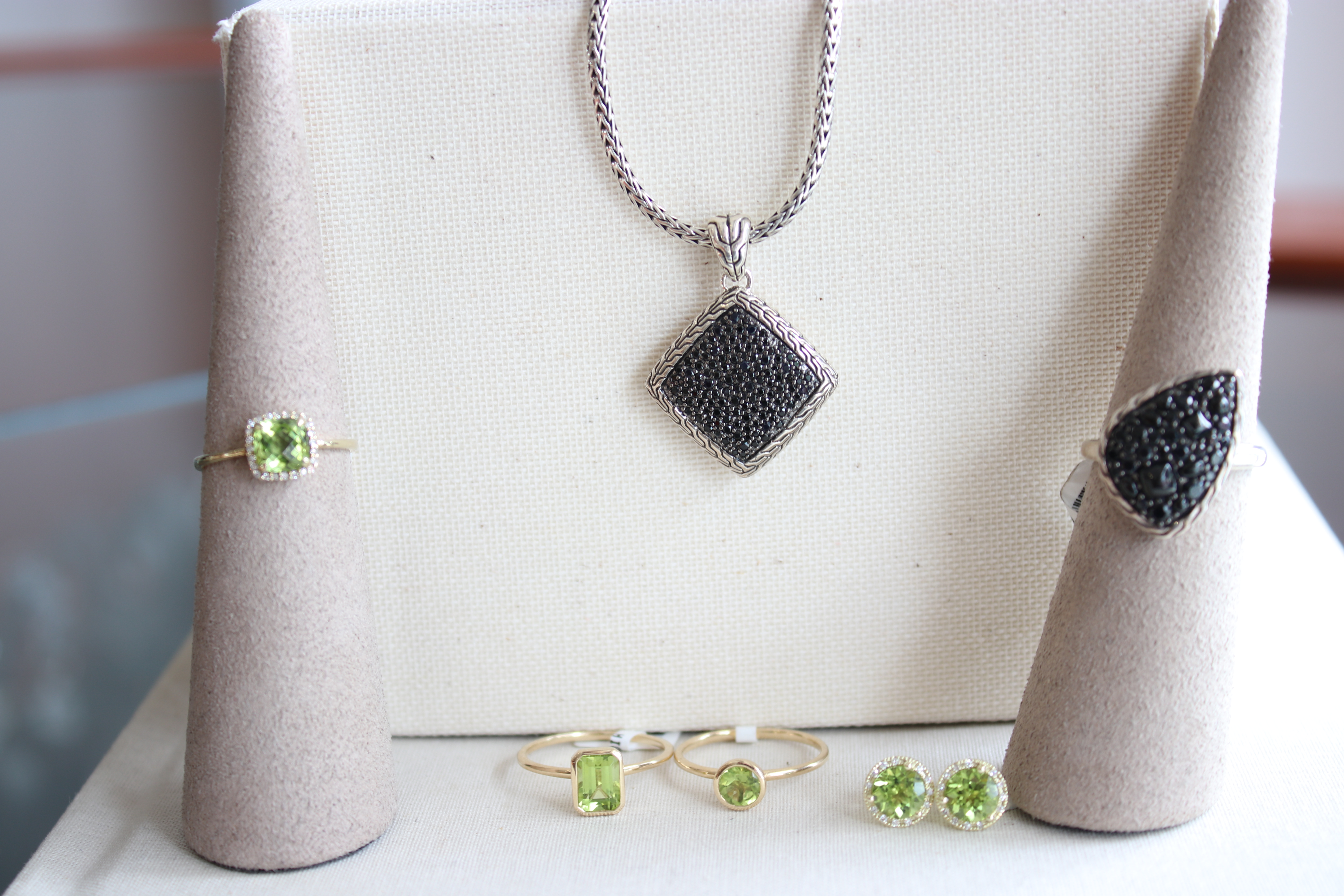 This month there are three birthstones to highlight: Spinel, Sardonyx, and Peridot. Most of the 12 months in the year have only one or two birthstones, but August is one of three months that has three. Throughout history and even today, these birthstones have often been mistaken for other gemstones. The most common mix-ups happen between spinel and ruby and peridot and emerald. With ties to space, Hawaiian gods, and ancient Romans, these three birthstones are quite unique.

Peridot is the most recognized birthstone out of the three for August. This gemstone has an interesting history, with ties to space and ancient gods.

Peridot has ties to Hawaii, as many believe that peridot symbolizes the tears of Pele, the Hawaiian volcano goddess of fire who controls the flow of lava. This unique gemstone also has ties to space, as peridot can be found inside meteorites. In 2005, peridot was found in comet dust brought back by the robotic space probe Stardust.

Peridots have been worn for centuries and have been used to protect and heal. Ancient Egyptians called peridot the “gem of the sun”, believing it protected its wearer from evil spirits and “terrors of the night”. Some historians believe that Cleopatra’s prized emerald collection may have actually been peridot. Even throughout medieval times, people continued to confuse the two green gemstones. This August birthstone has long been confused with other gemstones such as topaz and emerald. The Shrine of the Three Holy Kings in Germany’s Cologne Cathedral features 200 carats of gemstones that were believed to be emeralds but are in fact peridots. Peridot gained a lot of popularity during the Victorian and Edwardian eras. This was due to King Edward declaring peridot as his favorite stone, linking it with confidence, regality, and power.

Peridot can be found in a range of color variations, ranging from yellowish green to brown, although the most sought-after peridot stones are lime green or olive green. Peridot has a lime green glow that is widely recognized. This glow comes from the mineral olivine. This August birthstone is also named the “Evening Emerald”, due to its green hue and its ability to sparkle under natural or artificial light. This gemstone can look good at any time of the day.

Most of the world’s peridot supply comes from the San Carlos reservation in Arizona. Other peridot sources include China, Myanmar, Pakistan, and Africa. An estimated 80-95% of the world’s peridot supply is found at the San Carlos reservation. The Egyptian Island of Zabargad is the oldest recorded source of this August birthstone, and today peridot is the national gem of Egypt.

Peridot has been considered an aid for big life changes and is thought to bring forward a sense of warmth, friendliness, and protection. Some also believe that peridot can bring good luck to mothers going through childbirth, treat digestive issues, allergies, and improve nutrient absorption. This gemstone is associated with harmony, good health, restful sleep, and peacefulness. Something that sets this birthstone apart from others is that it is formed in the Earth’s mantle. The only other gemstone that is formed there is diamond. A true genuine peridot is formed in magma and then resurfaces during volcanic activity.

Spinel was the most recent addition to the August birthstone list, with the gemstone being added in 2016.

Throughout history, spinel was often confused with ruby or pink sapphire. Some of the most famous rubies in history have been revealed to be spinel. Some of these famous rubies include the Black Prince’s Ruby and the Timur Ruby in the Crown Jewels of England. They both were thought to be rubies, but they are in fact red spinel. The Black Prince’s “ruby” is set in Great Britain’s Imperial State Crown, just above the 317.40 carat Cullinan II diamond. It was not uncommon for important figures throughout history to be in possession of this August birthstone. Many English monarchs, including Henry VIII, had prized spinel gemstones.

Throughout history, red spinel was thought to be a remedy for all types of blood loss and inflammatory diseases. They were also believed to ease anger and promote harmony.

Spinel has been found throughout the world, including Cambodia, Myanmar, Sri Lanka, and Thailand. This gemstone is durable, making  it a great choice for rings and other pieces subject to daily wear. This birthstone is traditionally given as a 22nd wedding anniversary gift.

Sardonyx is the most ancient of the August birthstones. The gemstone has been around for many years, dating back more than 4,000 years ago to the Second Dynasty of Egypt. During Renaissance times, sardonyx was equated with eloquence. Also, public speakers wore this gemstone to aid clear thinking and communication.

Sardonyx has been prominent throughout history. For example, Ancient Greeks and Romans went to battle wearing Sardonyx talismans engraved with images of heroes and gods like Hercules and Mars. They believed the gemstone could grant them courage, victory, and protection on the battlefield. Roman soldiers also wore sardonyx rings with the image of the god Mars carved on them for extra protection in battle. Unlike rare gemstones that were historically limited to wealthy royals, sardonyx has been popular with elite and regular folk alike. However, the most famous sardonyx stone was set in a gold ring carved with the portrait of Queen Elizabeth I of England.

This gemstone is a combination of alternating layers of sard and onyx, which are two types of the mineral chalcedony. These alternating layers create a reddish zebra-striped gemstone with white bands. Today, sardonyx is associated with courage, happiness, and clear communication. This birthstone is widely available and relatively inexpensive as gems, beads, and jewelry.